XTO Gas Well Yet to be Capped After Explosion 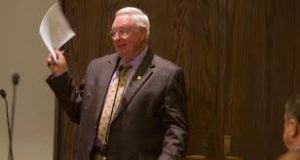 Oklahoma State Auditor Gary Jones is getting more support from Democrats in the State House for his proposed plan to solve the state government budget crisis.  After the House approved $44 million in budget cuts on Monday, Democrats unleashed criticism of House leaders for not allowing the introduction of what Jones has proposed.

A press release was issued by Rep. Steve Kouplen, an eastern Oklahoma Democrat from House District 24.

“It is unconscionable that the Republican leadership in the House has led the state to the point where further cuts to the current year budget are inevitable. Today, the House sent $44 million worth of cuts to be approved by the Senate. We firmly believe that there are still options on the table to bring in a small portion of revenue for this year and put the state on a better path forward beginning the next fiscal year,” said Kouplen.

The legislator from Beggs also repeated last week’s announcement that all House Democrats are willing to support the Jones budget plan.

“The House Democratic Caucus stands ready to commit all 28 of our votes to a bipartisan revenue package that includes the Republican Party’s cigarette and motor fuel taxes — along with our original request to increase the incentive gross production tax to 5 percent that has now garnered support from State Auditor Gary Jones and the Oklahoma Council on Public Affairs,” added the legislator. “This package, coupled with the Senate passing the itemized deduction cap from 2017, would allow us to close the upcoming budget hole and provide teachers and state employees with a raise. With 100 percent of our caucus supporting, we would only need 48 Republicans, or 66 percent of the caucus, to pass this plan.”

Kouplen went on to state in his release that Republicans are playing politics with the issue.

“As we have mentioned in the past, it seems that the Republican Caucus is more worried about political cover while cutting agencies than actually finding a solution. Otherwise, we would be voting on revenue packages regularly until we find a combination that works.”

Rep. Kouplen pledged again he and his caucus are ready to negotiate over the budget.

“Our fear is that as the race for the next Speaker of the House continues to heat up, we will continue to see fewer options for revenue and more of the same fiscal policy that has plagued this state for the last decade. Nevertheless, the House Democratic Caucus stands ready to negotiate at any time to prevent budget cuts and provide the revenue necessary for a teacher and state employee pay raise.”