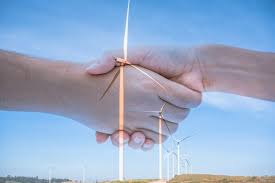 Wind giant Xcel Energy, a firm with a few hundred miles of transmission lines in Oklahoma has reached an agreement to construct another large wind farm near the New Mexico and Texas border.

The company, based in Minneapolis, Minnesota will build the $1.6 billion project near Portales, New Mexico and in Hale County in the state of Texas. It just wrapped up a deal with several parties in Texas. A few months ago, Xcel reached similar agreement with the attorney general in New Mexico.

Part of the wind farm project will include Xcel’s purchasing of more electrical power from NextEra Energy Resources. Xcell estimates the New Mexico and west Texas wind farm will be able to supply electricity for more than 440,000 homes.

The new wind operations will join those Xcel already has in six other midwestern and western states. Those wind farms already supply electricity to 3.6 million people in the U.S.