Chesapeake Pushes Ahead With Plans to Unload Debt 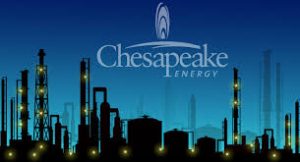 Trying to reduce its debt load, Chesapeake Energy in  Oklahoma City is moving ahead with two more of the sales agreements announced in late 2017.

It’s what the company indicated Tuesday in an update to its operational results for thel 2017 fourth quarter. Three separate sales agreements were signed then and in the first quarter of this year for properties located in the Mid-Continent operating area. The sales totaled nearly $500 million. The company said one of the dispositions closed in January while two are still subject to certain customary closing adjustments. Closings are expected to be made by the end of the second quarter of 2018.

The divestitures included producing properties, related property, plant and equipment and undeveloped acreage n the company’s Mississippian Lime operating area. The sales were also part of Chesapeake’s exit from the Mississippian Lime play of the northern Anadarko Basin. The divestitures totaled 238,000 net acres and 3,000 producing wells. Those wells have a current production of 23,000 boe per day net to Chesapeake.

Leaders at Chesapeake indicate they will use the proceeds to reduce outstanding borrowings under their revolving credit facility in the first half of 2018. They might even repurchase higher coupon secured or unsecured debt.

Otherwise,the company reported its average 2017 fourth quarter production was projected at 593,000 boe per day including oil production of 100,000 barrels a day. The 593,000 projection is 15 percent more when compared to the previous year’s production.

The company also said in the fourth quarter update that it had sold nearly 4.3 million shares of FTSI for proceeds of $78 million, while retaining nearly 22.0 million shares.

Doug Lawler, Chesapeake’s Chief Executive Officer, commented, “We continue to demonstrate increased productivity and capital efficiency from our investments by delivering these production volumes with a fourth quarter capital spend of roughly $525 million, inclusive of capitalized interest. As a result, we currently expect cash flow before changes in working capital of more than $550 million for the 2017 fourth quarter, or approximately $470 million after changes in working capital.”