BNSF Lays Out $110 million on Track Improvements in Oklahoma 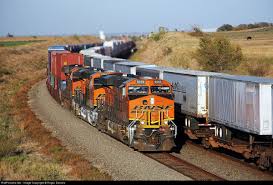 The BNSF Railway announced this week that out of $3 billion it plans to spend this year on track improvements across the U.S., at least $110 million will be spent in Oklahoma.

The company said the expenditures in Oklahoma will go toward replacing and upgrading rail, rail ties and ballast.  The $110 million will be added to $630 million spent on improvements in the state over the past five years.

As OK Energy Today reported early in February, the company announced $3 billion in maintenance and improvements around the country.

Maintenance will also be included in the Oklahoma funding. It will go toward 620 miles of track.  Nearly 30 miles of track will be replaced along with 230,000 ties.

“Each year, BNSF hauls approximately 28,000 carloads of wheat, corn, soybeans and other agricultural products from Oklahoma to domestic markets and to the ports for export,” said Janssen Thompson, general manager of operations for the Red River Division of BNSF. “We also move the fertilizer that helps those crops grow, in addition to consumer products, construction materials and energy products.”