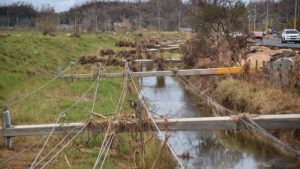 But sadly, some areas of the country won’t see power restored until as late as the end of May. The U.S. Army Corps of Engineers tweeted this week that “achieving 95% restoration in  areas with challenging terrain like Arecibo and Caguas, will take until mid-April and late-May respectively.”

The Corps estimates at least 95% of the island will have electricity again by the end of March. It was Sept. 20, 2017 when the Category 4 hurricane hit the island, plunging its 3.5 million residents into complete darkness.

The Corps also indicated this week that some of the electrical workers who came from the U.S. to offer help have started leaving.  At least a dozen PSO workers returned home this week.

Utilities like PSO and OGE and others have started a drawdown of their workforces.

“As a part of a natural progression of any emergency response, some contractors are beginning to responsibly draw down their workforce but have provided plans that allows them to complete as many assigned lines as possible,” the agency tweeted.

“The primary limiting factor to our progress has always been the delivery of materials, which is improving daily,” said Preston Chasteen, public affairs officer for the Army Corps of Engineers Task Force Power Restoration. “The number of workers has not been a limiting factor.”