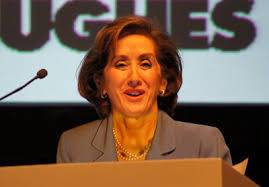 A woman is now chairman, president and CEO of Noble Corporation PLC, the company that got its start in Oklahoma. with U.S. offices in Houston but headquartered in London.

David Williams retired last week and the company appointed Julie Robertson as his successor in all three positions. Williams will stay with the company through February in an advisory role.

Williams led Noble for 10 years including through a time of volatility in the offshore drilling sector.

Robertson served as Noble’s executive vice president since 2006. She oversaw human resources, procurement and supply chain, learning and development, health, safety environmental functions and information technology. She previously was senior vice president of administration from 2001 to 2006.

Robertson also served as corporate secretary from December 1993 until her promotion last week. She first went to work for a predecessor subsidiary of Noble in 1979 and has been with the company ever since.