Another Rig Explosion Victim to be Buried Wednesday 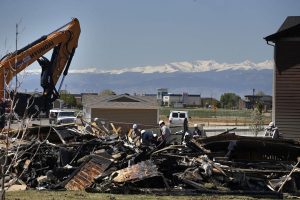 The deadly gas explosion that killed two men last year in a suburb of Denver, Colorado has led to a growing fight between shale drillers and homeowners.

The oil and gas industry is in a fight as environmentalists and homeowners want new rules mandating precise and comprehensive public mapping for underground lines.  Colorado Gov. John Hickenlooper ordered a review of the oil and natural gas operations after the blast in April in the community of Firestone.

It was an old gas line that led to the explosion. As a result of the public clamor, Anadarko Petroleum Corp. closed more than 3,000 wells in the state as a precaution.  As regulators extended the rule-making process into February, residents in the state want more disclosure about underground lines. They claim it would guarantee that the lines are properly maintained. But the industry is against it, arguing the additional public revelation of their operations would open them to terrorist strikes, according to a recent report by Bloomberg News.

A draft of new rules proposed by the Colorado Oil and Gas Conservation Commission was released last month. They do not include mandated public mapping which the public wants. But they do address management of abandoned flow lines and create new requirements for leak detection and pressure testing.

“What I’m seeing is that residents and homeowners are concerned whether the largest investment they have is safe,” said Sara Loflin, executive director of the League of Oil and Gas Impacted Coloradans, which seeks to promote oil and gas reform statewide.

The oil and gas industry sees it differently.

“We do not want to give roadmaps to those who wish to intentionally harm our energy infrastructure,” said Dan Haley, chief executive officer of the Colorado Oil & Gas Association, in an emailed statement. “That would only place a far greater number of people at risk.”

The escalation of the energy fight comes as drilling in Colorado has swelled in recent years.  It has doubled since mid-2016 to 25 rigs in the Denver-Julesburg Basin northeast of Denver.