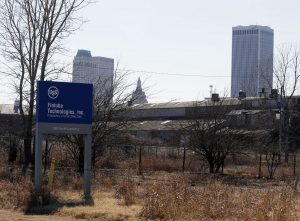 The city of Tulsa finds itself in a possible challenge as it wants to develop land north of downtown as the site for USA BMX headquarters and arena.

There’s a liquid butane storage company near the 22.3 acre site.  Mayor G.T. Bynum was to meet this week with the owner of the 2nd Base company that was formed in 2015. He wants the gas company to move so the city had develop the BMX site. The mayor has called the proposed headquarters site a “dream spot.”

Tulsa’s chief of development and community policy, Nick Doctor told the Tulsa World the city does not need to relocate 2nd Base in order to develop the BMX headquarters but its location “justs limits the development potential of the Evans-Fintube site as a whole.”  Evans-Fintube is the neighborhood north of downtown where the headquarters will be located.

“It also limits downtown’s ability to grow outside of the IDL (Inner Dispersal Loop) and really connect better with the neighborhoods that are adjacent to that site,” Doctor told the paper.

2nd Base company president Scott Dickman said he is willing to discuss things with the mayor. His firm is located on an 11-acre site in the railyards west of the Evans-Fintube property.

“He (Bynum) knows we would be willing to help the city,” Dickman said. “We want to be a good partner with the city, but there are realities. I can’t just pick up and move out of the goodness of my heart. I couldn’t afford that.”

Dickman said he spent nearly $3 million to create the company that transfers liquid butane from rail cars to tanker trucks.

Tulsa voters approved a $15 million financing last year of the BMX project as part of the Vision Tulsa sales tax package. BMX originally was to have been built at Expo Square but the deal collapsed when USA BMX and Expo Square officials couldn’t agree on concession sales.