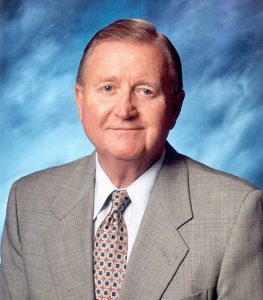 The Oklahoma State Supreme Court’s recent decision not to overturn a bribed 1989 Corporation Commission vote on an ATT rate case prompted one consumer to accuse the justices of “dereliction  of duty.”

The charge comes from Lt. Gen. Richard A. Burpee, the former commanding general of Tinker Air Force Base. He and a handful of others had filed suit again claiming the bribed vote that sent a corporation commissioner to prison should be made null and void and result in  a nearly $6 billion refund to Oklahomans.

After the recent court decision, he issued the following statement:

“The concept of “duty” is exceptionally important in the military.  Officers take an oath to “well and faithfully discharge the duties” of their office, “So help me God.”

Broadly, “duty” means accomplishing the assigned mission to the absolute best of one’s ability, despite difficulty or danger; doing what should be done when it must be done, selflessly and courageously.  Duty is more than just responsibility; it is obligation – and not to be undertaken lightly.

On Dec. 19, eight justices of the Oklahoma Supreme Court joined a long list of Corporation Commissioners and Attorneys General who have not just neglected their sworn duties as state officeholders, they have willfully failed to perform them.  In the military, they would be court-martialed.

In 1989 AT&T (then Southwestern Bell) defrauded its ratepayers in Oklahoma – including the United States Department of Defense and all Federal Executive Agencies – by bribing a Corporation Commissioner in a rate case.  Two people went to prison, but the bribed order was never overturned, allowing AT&T to keep hundreds of millions of dollars that should rightfully have been refunded to ratepayers.

The unlawfulness and injustice of this situation is perfectly clear.  And so should have been the duty of our state officials to correct it.  Yet time after time, Attorneys General have chosen not to bring legal action, Corporation Commissioners have chosen not to declare the bribed decision void and properly redecide it, and now the Oklahoma Supreme Court has chosen not to find bribery unconstitutional and allow an application seeking to refund billions to ratepayers even to receive a proper hearing.  The dereliction of duty in this state is not only disgraceful, it is lethal.

Misappropriating funds is serious, but public officials who either ignore or find excuses not to do their duty are fundamentally fatal to a democratic form of government.  Young people who believe their government is full of corrupt officials acting in their own self-interest rather than the public interest will refuse to serve and defend it when their country comes under attack.

Similarly, those in the United States military who take their sworn duty seriously will refuse to do business in a state whose public officials cannot be relied upon to protect our armed services from obvious fraud.

Everyone agrees the bribery in this case is wrong, but most of our public officials want someone else to fix it.  They know what should be done, but citing “jurisdiction” or “preclusion,” declare themselves impotent.  These officials should be relieved of their duties.

The DOD and FEA were parties to this case from the outset, and their filing citing “compelling evidence of intrinsic fraud” and “criminal activity” indicates they may be willing to seek justice at the federal level if Oklahoma officials won’t do what’s right.

But know this, the United States military does not take kindly to being defrauded.  The ongoing dereliction of duty by officials in this state will have consequences. “