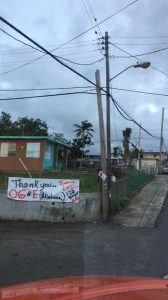 Grateful Puerto Ricans are showing their appreciation to the 50 Oklahoma Gas and Electric linemen who arrived this week and went to work restoring electrical power months after Hurricane Maria. Some gave up their homes so the linemen would have a place to sleep.

The gratitude has surprised even hardened linemen like Rick Berg.

“These people, what they’ve gone through for so many days and still the attitudes they have,” he said in an interview with News 9’s  Dana Hertneky. “The other day they even signed a Puerto Rican flag and gave it to one of our teams that got the power restored. So, it’s a great celebration after 123 days.”

Four months after the hurricane battered the island, 40 percent of the country remains without power.

Four months after Hurricane Maria battered Puerto Rico, nearly 40% of the country is still without power. The OGE crews arrived over the weekend and started restoration and repair work on Monday. Their trucks arrived by barge late last week after being shipped out of Louisiana.

Berg said people in Puerto Rico moved out of their homes so the crews would have a place to sleep.

PREPA, the utility company in Puerto Rico, asked for the assistance. OG&E is one of 19 companies that offered to send crews.

“For the most part we want to send experienced people who have been doing this because the conditions are different down there,” said Kathleen O’Shea, OG&E Spokeswoman.

But on the very first day, they were already able to help get the lights back on. And the crews are thanked with cheering, and signs.

For Rick Berg, that makes the 28 days he’s away from home worth it.

Wednesday, the second wave or workers were getting vaccinated and briefed. They are scheduled to arrive in Puerto Rico around February 8.