Iowa is no longer the No. 2 wind power state in the U.S.  The honor now belongs to Oklahoma, according to the American Wind Energy Association. 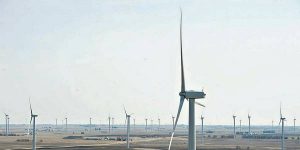 But other massive projects are in the works for the state including the 2,000 megawatt Wind Catcher wind farm in the Panhandle that’s being developed by American Electric Power and Invenergy. It will be the largest wind farm in the U.S. once it is completed. Other projects are under construction to supply 1,366 megawatts of production in the state.

Nationally, 29 new wind farms were built in 16 states, adding 4,125 megawatts.  The country’s total capacity in 41 states is 89,077 megawatts, enough to supply electricity to 26 million homes in the country.

But those figures are changing because projects are under construction to add another 13,332 megawatts in capacity.