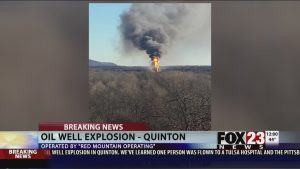 It could be overnight when a burning gas wellhead might be extinguished in southeast Oklahoma following a Monday morning blast that left five workers missing and possibly dead and at least one injured.

The well, located several miles west of the town of Quinton exploded around 8:45 a.m. and resulted in a massive fire that could be seen for miles. Five workers apparently were caught in the inferno and were unable to escape.  Seven others managed to flee with one receiving enough burns and injuries that the worker was medi-flighted to a hospital for treatment.

“They’re all pretty shook up from what I’ve seen, I mean, which is expected,” said Pittsburg County Sheriff Chris Morris. “It’s a pretty traumatic thing to go through.”

The one injured worker initially refused treatment but was later flown from the scene to a hospital.

“I do not know a cause at this time,” said Pittsburg County Emergency Management Director Kevin Enloe. Late Monday, he said secondary fires around the well site had been extinguished but the main wellhead fire was still burning fiercely.

He told reporters during a late-afternoon news conference that rescuers were only able to get within about 100 feet of the burning wellhead. A company that specializes in oil and gas fires had been called to the scene as the gas drilling rig remained engulfed in flames.

“Pretty much everything that is on location was on fire,” Enloe said. He called it an active drilling site where the blast occurred.

Enloe said companies were working to shut off the well after the blowout preventer became inoperable because of the blast. The preventor is designed to automatically shut down a well.

Secondary explosions in the area caused Enloe and crew to back off the site, according to the McAlester News Democrat.

“There’s been several explosions since the guys have been on the scene fighting the fire,” Enloe said. “That’s why we pulled everyone back out, because we’re still continuing to have secondary explosions.”

The names of the missing workers had not been released. While extensive searches had been made around the well site, they could not be located. Enloe never indicated the workers were apparently believed to have died in the blast.

But Sheriff Morris said at the end of the news conference that any names would be released later after perhaps identities had been established by the State Medical Examiner.

The rig site is owned by Red Mountain Energy LLC of Oklahoma City. It contracts workers from other companies including Patterson-UTI Drilling Co., a firm based in Houston, Texas.

Enloe and Sheriff Morris indicated the 5 missing were from two companies involved in the drilling operation.

The News Democrat reported the blast happened just three miles from the site of another explosion on a site owned by Trinity Operating LLC.

Patterson UTI has extensive operations in Oklahoma. Its website rig locator identified 49 working rigs in a dozen counties in the state. The company has offices in Oklahoma City and Woodward but its headquarters are in Houston, Texas. Other offices are in Pennsylvania, North Dakota, Colorado, Texas, Wyoming and Canada.