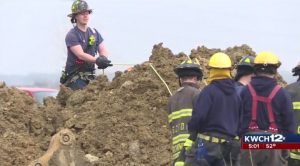 The dangers of laying pipeline were brought home on Thursday when a 29-year old man was killed when an estimated 20 tons of dirt buried him alive while he worked on laying pipe in Wichita, Kansas.

Three others with him escaped unhurt.

Crews dug desperately for 5 hours before finding the man who worked for Wilks Underground Utilities, a Wichita firm. The man was working at the bottom of a trench when it caved in. It’s not known if crews were using a trench box or not.

But the Occupational Safety and Health Administration was on the scene.