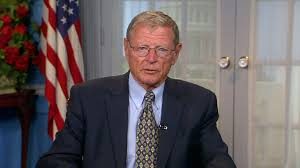 A warning about the need to make improvements to the nation’s transportation network was recently issued by Oklahoma U.S. Sen. Jim Inhofe during a Senate subcommittee hearing.

“The economy will only continue to grow if our infrastructure is maintained and expanded to meet our future needs,” he warned to the Environment and Public Works Subcommittee on Transportation and Infrastructure. Inhofe chaired the recent hearing entitled “Freight Movement: Assessing Where We Are Now and Where We Need to Go.”

He said more than 18 billion tons of freight worth $19 trillion moved over the nation’s highways, railways, waterways and through the air in 2015. The numbers are expected to grow said the senator.

“Yet when freight is delayed on congested highways, diverted around structurally deficient bridges or awaiting movement at our ports and on our waters, an estimated $27 billion annual in increased costs are borne by businesses, raising prices on consumer goods,” said the Senator. “The more delays we see, the further behind we will become.”