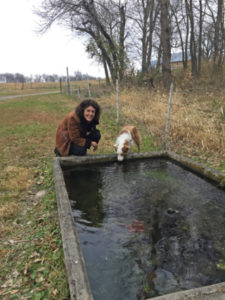 The fight against an expansion of wastewater injection wells in the Flint Hills of Kansas is being led by a 56-year old woman who once worked 20 years as a writer and editor for the Kansas City Star.

She is Cindy Hoedel who moved from Kansas City in 2016 to the small Morris County town of Matfield Green. There, she has sparked a movement against the efforts of the oil and gas industry in seeking state permission to allow the wells.

She is fighting the Quail Oil and Gas Company which applied for a permit to put a wastewater injection well near the town of Diamond Splrings, according to the news website, The Pitch.

Part of Hoedel’s opposition is based on the September 3, 2016 earthquake that hit Pawnee, Oklahoma. The 5.8 magnitude quake was definitely felt by the people who live in the rolling grass-covered Flint Hills. The growth of earthquakes in Oklahoma left Kansas residents feeling them as well.

When Quail Oil asked for the state permit to injection up to 5,000 barrels of wastewater a day into the ground, Hoedel and others became concerns about the potential impact it would have on water and in causing quakes in Kansas.

She and others mobilized and formed the Flint Hills Stewards. Initially, their organization covered what might happen in Morris County but now its efforts have grown statewide.