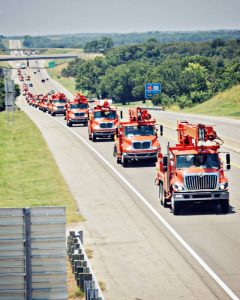 When OGE crews arrive in Puerto Rico in the next several days to began restoring electricity, it won’t be a pretty picture.

While Oklahomans might endure power outages of several hours to several days, it pales in comparison to what some Puerto Ricans have suffered. In the city of Morovis, the 30,000 residents in the mountains of the central part of the state have been without power for three months in the wake of the battery the U.S. island suffered from Hurricane Maria.

Writing for the Associated Press, reporter Danica Coto got more than a mere glimpse of what she described as a “dark, desperate life without power” in Puerto Rico.

Many spend a daily wait of two hours for a twice-a-week handout which includes 24 bottles of water and a box filled with canned vegetables, cereal and other basic foods.

That’s what will greet the OGE workers who joined with other utility firms in a recent cooperate effort. Their vehicles were sent by barge in late December and the workers are flying into Puerto Rico to bring relief to thousands without electrical power.

This is what reporter Coto wrote about the power situation.

“This is life in Puerto Rico more than three months after Maria destroyed the island’s electrical grid. Gov. Ricardo Rossello promised in mid-October to restore 95 percent of electricity delivery by Dec. 15, but normality remains far off. Puerto Rico’s Electric Power Authority says its system is generating at 70 percent of normal but it has no way of knowing how widely electricity is being distributed because the system that measures that isn’t working.”

In early December, a study by local engineers estimated 50 percent of the island’s 3.3 million people did not have electricity. And the U.S. Army Corps of Engineers added further darkness to their plight, suggesting it won’t be until May when the entire country regains electrical power.

That’s what is facing OGE workers.