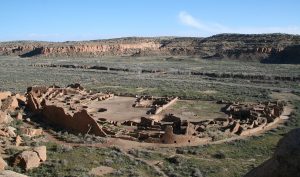 Democrats in New Mexico’s congressional delegation are making a renewed push to put limits on drilling of federal land in the northwest corner of their state. They want to protect archaeological and cultural sites in the region.

U.S. Sens. Tom Udall and Martin Heinrich and Reps. Ben Ray Lujan and Michelle Lujan Grisham sent a letter this past week to the acting state director of the Bureau of Land Management in New Mexico. They expressed concerns that the relaxing of rules by the Trump administration could put Indian sites at the Chaco Culture National Historical Park in jeopardy.

The BLM has already deferred the leasing of some sites within a buffer zone but critics want others excluded as well.

“Gas development is critically important to New Mexico’s economy and it is important that leasing and development is done in a responsible manner that minimizes negative impacts, especially on rural, low-income and tribal communities,” the letter reads.

The Senators and Representatives worry about a lease sale scheduled for March and noted that a fire at a production site in the region last year forced the evacuation of dozens of  residents from the Navajo community of Nageezi.

They asked the BLM to review the stipulations that govern oil and gas operations near homes and other buildings.

The Chaco park is considered to be a world heritage site. Its nearby archaeological remnants are already the focus of a fight over expanded drilling in the San Juan Basin. Critics want a moratorium on drilling but oil and gas developers responded by saying they can operate in ways to protect significant sites.

The critics have asked for a moratorium on drilling, saying increased development has the potential to destroy parts of the landscape that could provide a better understanding of the ancient civilization that once inhabited the area.