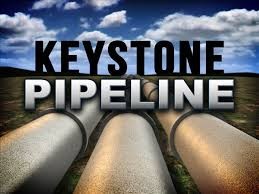 Following a massive leak of more than 200,000 gallons of oil in Amherst, South Dakota, Calgary-based TransCanada shut down a portion of its 2,687-mile Keystone Pipeline, according to a company press release issued on Thursday morning.

The leak was detected following a drop in pressure overnight. The affected area is located in Marshall County, an agricultural area that is sparsely populated. No bodies of water were involved.

TransCanada said the pipeline was shut off from Hardisty, Alberta to Cushing, Oklahoma, and to Wood River/Patoka, Illinois. The Marketlink pipeline, the southern leg of the system that utilizes the Keystone system from Cushing and stretches to the Mississippi Gulf Coast, remains open, according to the press release.

There is no information on a possible cause or when the pipeline might reopen.

Nebraska officials are scheduled to vote in four days to determine whether approve will be granted to the 275-mile-long extension of the project through the state. State approval is needed after President Trump revived the Keystone pipeline project that was rejected by the Obama Administration.

“We’ve always said it’s not a question of whether a pipeline will spill, but when, and today TransCanada is making our case for us,” said Kelly Martin, director of the Sierra Club’s “Beyond Dirty Fuels” campaign.

“This is not the first time TransCanada’s pipeline has spilled toxic tar sands, and it won’t be the last,” said Martin. “There is no such thing as a safe tar sands pipeline, and the only way to protect Nebraska communities from more tar sands spills is to say no to Keystone XL.”

The last major Keystone pipeline leak occurred in April of 2016 in Hutchinson County, South Dakota. According to federal records, that leak, which was blamed on a “weld anomaly,” was initially reported at 4½ barrels, or 187 gallons; however, it was revised to 400 barrels, or 16,800 gallons nearly five days later.