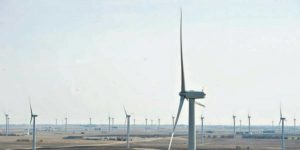 The Oklahoma Chapter of the Sierra Club has launched an effort to get people to sign a petition urging the Oklahoma Corporation Commission to sign off on the largest wind energy project in the U.S.

In an email message this week, Oklahoma Chapter Director Johnson Bridgwater said the Wind Catcher project proposed in the Panhandle would save customers $2 billion in lower electric bills over the next 20 years.

He said it would also create quality jobs and economic advancement in the state.

He went on to state that the wind industry has created good-paying jobs and supported local schools through millions in tax payments. Bridgwater called it “one of the most beneficial industries in Oklahoma.”

“Just as importantly, wind farms in the rural western and central part of the state pay fees to ranchers and farmers. These payments have allowed family farms to be held together during the recent drought and other down times in agriculture,” he added.

As OK Energy Today reported in July, the $4.5 billion project proposed by Public Service Company of Oklahoma would involve the construction of 800 turbines and a 350-mile transmission line to move electricity to PSO customers in four states.

However, Oklahoma Attorney General Mike Hunter is fighting the project.