Keystone XL Decision to be Made Monday by Nebraska 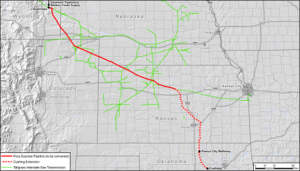 Based in the Kansas City suburb of Leawood, Tallgrass Energy Partners LP has announced an open season seeking new commitments on its Pony Express Platteville Extension in northwestern Kansas.

The deadline for submitting bids in the open season is Nov. 29, 2017. Total commitments on the Extension are 32,500 barrels a day. Pony Express Pipeline LLC, a subsidiary of Tallgrass Energy also announced another open season for shipper commitments for crude oil transportation service originating at a new point located in Rooks County, Kansas. The new origin point is expected to be in service in the first quarter of 2018 and Pony Express will carry oil to the Ponca City Refinery and Cushing destinations.