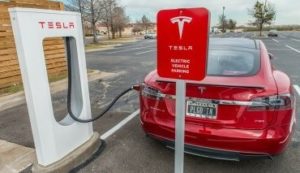 As Tesla moves ahead with plans to have nearly 10,000 high-speed Supercharger electric car chargers in place across the U.S. by the end of the year, it’s only adding one more to those existing in Oklahoma.

Henryetta is to get one according to the Tesla website while the state has only five others that already run along the interstates. Superchargers are already in place at the Hard Rock Hotel and Casino along I-44 in Catoosa; the Interurban Classic Grill along I-35 in Ardmore; the Outlet Shoppes next to Interstate 40 in Oklahoma City; The Mobil 38 station on Fir Street in Perry which is along I-35; and Lucille’s Road House along I-40 in Weatherford.

Most of the superchargers are being installed along interstates and in suburbs, indicating Tesla is providing them for the long-distance traveler rather than those who drive to work and back. Since most electric cars have a range of about 200 miles or more on a fully-charged battery, it’s important to have the superchargers for long-distance travel.

The superchargers allow a car to be fully charged in minutes rather than hours that it takes at the conventional charging stations.