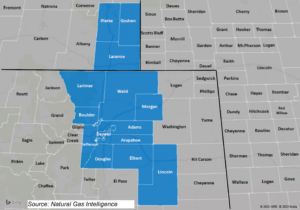 Houston’s Noble Energy is making a deal to sell $608 million in thousands of acres in Colorado’s DJ Basin.

More than 30,000 acres in Weld County are being unloaded as the company said it had not planned development there for several years. It’s also an area where Noble pumps only about 4,100 barrels of oil equivalent a day.

One of the areas is named the Greely Crescent and the other half is known as the Bronco area of the basin.

The sale will be completed by the end of the year and will still leave Noble with 335,000 net acres in the DJ Basin.