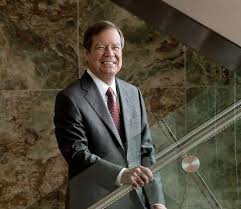 Larry Nichols was recently named as the inaugural recipient of Hart Energy’s Shale Visionary Award, according to a press release issued Tuesday.

“Today, horizontal drilling and hydraulic fracturing are commonplace across our industry – standard operating procedure,” said Nichols. “It’s nice to be reminded that this was not

always the case, and it started at Devon. We were trying to solve a simple problem back in 2002; how to get natural gas out of North Texas’ Barnett Shale without producing water from the Ellenberger formation beneath it. We did it, and the technique quickly revolutionized our entire industry.”

The award presentation was made by Nissa Darbonne, author, historian, and editor-at-large of Hart Energy’s Oil and Gas Investor magazine.

“Thanks to Larry Nichols’ vision, Devon looked at George Mitchell’s Barnett Shale program in 2001, bought it and took it lateral,” said Darbonne. “Devon, under Larry Nichols’ leadership, made it a world-changer with the successful introduction of the fractured lateral. Here we are today, with Devon continuing to lead the industry in new technology, honoring Larry for his leadership in a newly assured American energy future.”

Nichols serves on the board of the National Association of Manufacturers. He is a former Chairman of the American Petroleum Institute and the American Exploration & Production Council.