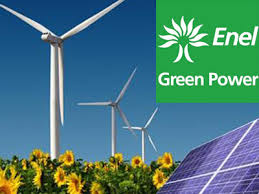 Work begins nearly a year after the company completed and connected to the grid the Drift Sand and Chisholm View II wind power plants in northern Oklahoma. Chisholm View II is an expansion of the existing 235 megawatt wind farm in Grant and Garfield Counties. The Drift Sand wind project is located near Rush Springs in Grady County and has installed total capacity of 108 megawatts.

In Nebraska, work is underway on the $430 million Rattlesnake Creek wind farm and when completed, it will have a capacity of 320 MW. The wind energy will supply 100% of the power needed to operate Facebook’s new data center in Papillion, Nebraska located about 120 miles from the Rattlesnake Creek wind project which is in Dixon County.

Enel Green Power acquired the project from Tradewind Energy, its long-term strategic development partner headquartered in Kansas. Enel Green has other operations in south central Oklahoma and in Osage county.

Enel Green has been in a court fight with the Osage Nation over development of another wind farm. It recently went to the U.S. 10th Circuit Court of Appeals in Denver in the case as reported in October by OK Energy Today.