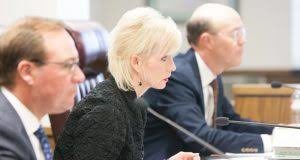 Even as the U.S. Senate was poised to vote on the GOP tax reform plan, Oklahoma Corporation Commissioner Bob Anthony was urging fellow commissioners to support the measure.

His words of encouragement Thursday morning came as Arizona Republican Sen. John McCain announced his support for the measure, an important move for President Trump and Republican leadership.

But Commissioner Anthony felt the bill should be supported at the state level because of the impact it will have on lowering utility bills for consumers in Oklahoma.

“We’re all watching our budgets but electric bills are very significant and this plan could result in significant savings also to State government,” said Anthony in explaining his proposal to Commissioners Dana Murphy and Todd Hiett. “It will also have a direct benefit to customers.”

Anthony cited approval of a similar resolution by the National Association of Regulatory Utility Commissioners at its recent meeting in Baltimore, Maryland. He is a member of the association which came out in support of the President’s tax plan and stated changes to the tax code could result in a “reduction in the corporate income tax rate and should result in a direct benefit to customers.”

Anthony thinks the same thing will happen in Oklahoma if the tax reforms are made law but it hasn’t been considered in the news coverage.

“I’m disappointed in the national debate,” he told the commission’s meeting. “The low income, the poor and middle class—-everybody pays but under this, utility rates would be significantly reduced.”

That translates into savings for consumers.

“It could benefit rate payers. But nobody is mentioning that fact,” argued Anthony.

Under the NARUC resolution, commissioners said if the corporate income tax rate is reduced from 35% to a lower rate, it will increase the deferred tax reserve that should be refunded to customers.

Anthony says utilities don’t really pay taxes but rather collect them from customers. As he pointed out, even the Oklahoma Industrial Energy Consumers agreed. An OIEC witness in a recent PSO rate high case testified that if the corporate income tax rate was reduced from 35% to 25%, nearly $20 million would result from the reduction.

“But if the rate was reduced from 35 percent to 20 percent, it’s more than obvious the savings could be in the range of $30 million,” said Anthony. “Clearly, there could be over $50 million in benefits from the tax reduction.”

Commissioner Dana Murphy agreed with the savings but also felt similar discussions on related politic topics had been held in the past but came to no fruition. She cited promises of eliminating Obamacare.

“It’s good to be aware of this, but we don’t know where we are if nothing’s passed,” she said.