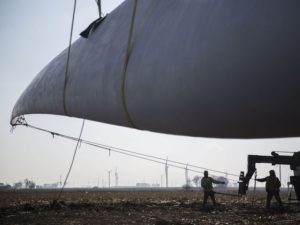 What happens when wind turbines get old?  If they belong to MidAmerican Energy based in Iowa, they are refurbished as part of a $1 billion updating project announced by the company.

It plans to update more than 700 older wind turbines across Iowa. The company will start on three wind farms built in 2004 in northern Iowa. The update will include retrofitting with newer components including longer blades which will extend the lifespan another 20 years.

That’s no easy task as work has to be carried out usually at night when winds calm. Further, each wind turbine blade weighs 13,450 pounds. Workers have to use a crane and ropes to lift and attach a new nacelle some 213 feet above the ground.

The Des Moines-based utility says each upgraded turbine will net between 19 and 28 percent more energy a year.