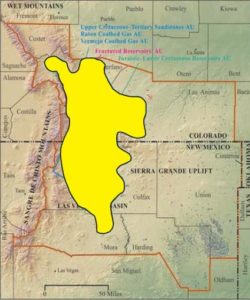 Oklahoma isn’t the only place where scientists are linking wastewater disposal wells to earthquakes. Researchers at the University of Colorado’s Department of Geological Sciences are making the same new claim of recent earthquakes in what is called the Raton Basin located in southern Colorado and northern New Mexico.

They contend the deep underground wells have caused more than 1,800 earthquakes up to magnitude 4.3 during the time period that was studied from 2008 to 2010. There are 28 disposal wells in the basin and an estimated 200 million barrels of wastewater have been injected since 1994.

“What makes our research different is by having established a causative mechanism for the seismic activity — which is the increase in pore pressure from the area’s wells,” said CU doctoral student Jenny Nakai, the lead author of the study.

He also said the study did not explore any ties between hydraulic fracturing and the quakes in the Raton Basin according to a report in CU’s Daily Camera.

Most of the earthquakes went undetected by the U.S. Geological Survey until seismometers were placed in Colorado and New Mexico from the EarthScope USArray Transportable Array beginning in 2008.

The President and CEO of the Colorado Oil and Gas Association, Dan Haley responded to the study which was published in the Journal of Geophysical Research: Solid Earth.

He said 98.8 percent of injection wells in Colorado operate without seismicity and that his group was still reviewing the study.

“Colorado has one of the best permitting programs for underground injection control in the country, and requires operators to submit detailed documentation on the geology where they plan to drill or inject water prior to receiving a permit,” said Haley.