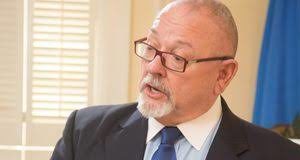 In something of a surprise move, the Oklahoma Senate on Thursday approved a resolution urging the State House to raise gross production taxes on oil and gas wells as a way to resolve the state’s budget crisis. It drew an immediate rebuke from oil and gas groups.

“The continued erosion of tax policy that has drawn billions of dollars of investment capital into the state will only reduce our state’s ability to attract new drilling,” stated Tim Wigley, President of the Oklahoma Independent Petroleum Association.

Senate Republicans said they would support a plan for a 4 per cent gross production tax for the first 36 months of a new well’s production. On Wednesday, Democrats in the House indicated they wanted a 4 percent rate for just 12 months. After a year, the rate would climb to 7 percent.

Since a budget proposal must first originate in the State House, the Senate resolution is just that—a resolution that urges the House to take action to raise oil and gas production taxes.

“Adding (gross production tax) to the budget deal certainly wasn’t my first choice, but if it breaks the stalemate it is an option we have to pursue,” he said in a news release. “We now have an opportunity to deliver on teacher pay raises, stop massive budget cuts to health care, and eliminate the constant budget problems plaguing our state.”