Inhofe Puts ‘Hold’ on Democratic FERC Nominee…..Causes Delay in Others 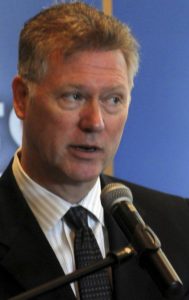 An economist is predicting that Oklahoma will soon jump from number five in oil production to third in the U.S.

It’s the prediction of Mark Snead, president and economist of RegionTrack who spoke recently at the Enid Regional Development Alliance’s quarterly luncheon, according to the Enid News.

“We are looking for record production level, in terms of crude oil … sometime in the next six months,” he said. “All-time production highs in Oklahoma. We aren’t really looking for substantial gains in natural gas. In fact, we’re probably assuming flat production to maybe slightly upward production for many years. It’s just an overwhelming supply issue.”

Snead expects Oklahoma to soon rank third in oil production because production in California and Alaska is dropping.

“Once Oklahoma gets ramped up again, and we start drilling aggressively for crude, you’re likely going to see us pass both California and Alaska.