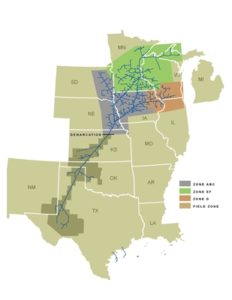 Nearly 16 years after a deadly leak from an underground natural gas storage field in Kansas and a new squabble has developed over unplugged abandoned wells and natural gas leaks.

It stems from attempts of the Northern Natural Gas Co. to have the Kansas Corporation Commission force well owners to plug abandoned wells, according to the Associated Press. The company is headquartered in Omaha, Nebraska where it is a subsidiary of Berkshire Hathaway Energy. It owns and operates the largest interstate natural gas pipeline system stretching across Oklahoma and ten other states.

But the KCC’s rejection led to Northern Natural Gas going to the Federal Energy Regulatory Commission. There, the company accused the KCC of sitting ” on its hands with full knowledge of the risk” and being “complicit by allowing the wells to remain unplugged.”

The issue arose last April when a farmer spreading fertilizer on his field near Pratt hit the surface pipe of a well, resulting in a release of gas and liquids. There was no explosion and the farmer wasn’t hurt but the well owner would not take responsibility for extinguishing the blowout in the Cunningham Storage Field.

The state eventually plugged the well at a cost of $166,030 to the state and consequently two other leaking gas wells were found in the area.

There are 17 underground natural gas storage operations in Kansas and the Cunningham Storage Field includes parts of Pratt, Kingman and Reno Counties.

Sixteen years ago Tulsa-based ONEOK Inc. owned the Kansas Gas Service where a leak in Hutchinson left a couple dead. Since then, ONEOK sold the company and reached a settlement over lawsuits.