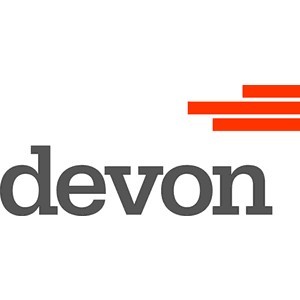 “We continue to deliver outstanding well productivity from our U.S. resource plays as we execute on our development plans,” said Dave Hager, president and CEO. “During the quarter, we had some of the best drill-bit results in Devon’s history with 50 new wells averaging 30-day rates in excess of 2,100 Boe per day. Importantly, we delivered these prolific wells with a capital investment that was below the low end of our guidance range for the third consecutive quarter.”

“With these strong results, we remain on track to achieve our 2017 exit rate production targets, and we are positioned to deliver attractive, high rate-of-return growth in 2018,” said Hager. “A key driver of our operational momentum is the advancement of multi-zone development activity across our world-class STACK and Delaware Basin opportunities. With several projects underway, this cutting-edge development technique will optimize per-section recoveries, while improving capital efficiencies by 20 percent.”

Devon’s net production averaged 527,000 oil-equivalent barrels (Boe) per day for the third quarter of 2017, down from 577,000 Boe from a year ago. This result exceeded the midpoint of the company’s Hurricane Harvey-adjusted guidance by 6,000 Boe per day. Oil accounted for the largest component of the company’s product mix at 44 percent of total volumes.

The majority of the company’s production was attributable to its U.S. resource plays, which averaged 403,000 Boe per day during the third quarter. Storm-related curtailments reduced production in the U.S. by approximately 15,000 barrels per day (65 percent oil) in the quarter, with the most significant impact in the south Texas Eagle Ford play. The strongest asset-level performance in the quarter was from the company’s STACK assets, where production advanced 26 percent compared to 2016 exit rates.

In Canada, net production was at the top-end of guidance averaging 124,000 Boe per day during the third quarter. A maintenance event at Jackfish 2, completed over a three-week period in July, curtailed production by approximately 15,000 barrels per day in the third quarter. Devon’s Jackfish complex has returned to pre-turnaround production levels and exited September at rates that are 24 percent above nameplate capacity.

Devon continued to make progress in paring down its properties. In the third quarter, the company’s divestiture program progressed with an additional $80 million of asset sales, increasing overall proceeds to $420 million to date.

Due to the closing of the Lavaca County assets at the end of the quarter and other minor asset sales, Devon’s fourth quarter production is expected to be reduced by 5,000 Boe per day (60 percent oil).