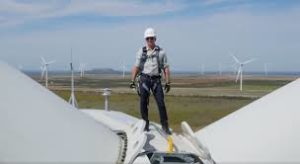 Amazon’s CEO Jeff Bezos recently climbed atop a wind tower in west Texas to smash a bottle of champagne and christen the start of a wind farm that will provide power to his huge company.

As the Dallas Morning News reported, Bezo launched the 253-megawatt Amazon Wind Farm Texas in Scurry County. His company has purchased more than 1.22 gigawatts of output from U.S. clean-energy projects.

The Amazon Wind Farm Texas was built by Lincoln Clean Energy, an I Squared Capital Advisors company. It will deliver more than 1 million megawatt-hours of clean energy to the grid annually, Amazon said in a statement Thursday. It’s among 18 Amazon wind and solar projects in operation, and the company has more than 35 projects in development