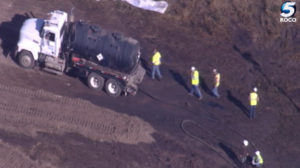 Cleanup is still underway of a nearly 16,000-gallon-oil spill after a contractor ruptured a 16-inch crude oil pipeline last week south of Cushing.

The contractor had been hired by Plains All American Pipeline LP and accidentally struck a line operated by Centurion Pipeline according to an update from the Stillwater NewsPress. The incident happened Oct. 10 when a dozer operator ruptured the line.

An estimated 377 barrels or 15,834 gallons of crude oil were released. The line normally carries about 70,000 barrels of oil a day and repairs were quickly made. But the cleanup from the spill is taking much longer.

Corporation Commission spokesman Matt Skinner described the cleanup as a “dig and haul” operation in which the contaminated soil is removed and disposed of in a landfill approved by the Department of Environmental Quality.