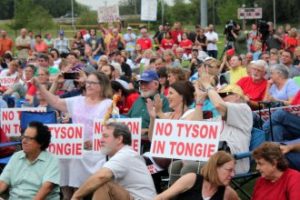 Tyson poultry president Doug Ramsey notified the city of Tonganoxie this week, “We’d still like to get to know each other, however, after Monday’s reversal of support by the Leavenworth County Commissioners, we will put our plans in your community on hold.”

He said the company still is interested in Leavenworth county as a site for the massive project, “but will prioritize the other locations in Kansas and other states that have expressed support.” 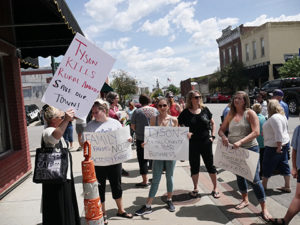 The Associated Press reported that as of mid-week, more than  a dozen other cities in Kansas contacted the state about becoming the site of the proposed Tyson plant.

Jackie McClaskey, Kansas Secretary of Agriculture stated, “There are a lot of discussions happening among local leadership in some of those communities who were paying attention. They’re getting ready, so to speak, to put their names forward.”

As OK Energy Today reported, an estimated 2,000 people protested the proposed project at a community meeting last week in Tonganoxie.