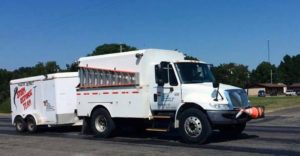 Hundreds of Oklahomans from utility companies are in Florida attempting to restore electricity to the millions who lost power during Hurricane Irma.

“They expect it to be a little of everything,” said PSO spokesman Stan Whiteford in explaining what the linemen and others could expect. That includes replacing power poles, re-stringing lines, reconnecting lines to businesses and homes and replacing equipment damaged by the hurricane.

“They’re practically going to have to build things,” he added. Caravans of PSO trucks left earlier in the week from Tulsa, Lawton and McAlester.

“Many of our workers have just returned after two weeks in south Texas helping our sister company, AEP Texas, recover from the devastation caused by Hurricane Harvey,” Vice President of Distribution Operations Steve Baker said. “And now, our employees are again leaving their homes and families to help others in need, which demonstrates their extraordinary level of service and sacrifice.” 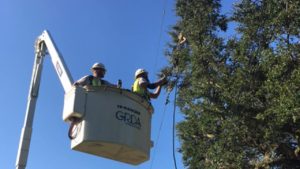 Nearly 30 linemen from local co-ops in eastern Oklahoma including East Central Oklahoma Electric of Okmulgee arrived this week in eastern Georgia where they too are helping restore electrical power. They expect to be there for two weeks before deciding if further help is needed.

Crews from the Grand River Dam Authority are in central Florida. An estimated 30 workers are working the area between Tampa and Orlando.