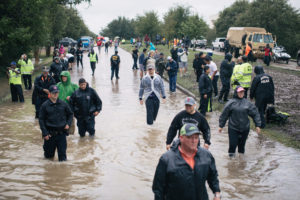 The latest were members of the 90th Troop Command forming Task Force 120.  They left Broken Arrow and once after arriving in Austin, Texas will be deployed in various support operations including security.

Meanwhile the New York Times finds it interesting that Texans now want federal assistance while also distrusting the federal government. In a Tuesday story, the paper pointed out how U.S Sen. Ted Cruz, who once voted against federal hurricane aid for the state of New Jersey now wants it for his home state.