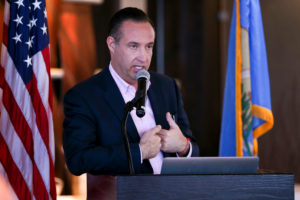 Preston Doerflinger, Secretary of Finance, Administration and Technology said gross production tax collections totaled $19.9 million or $3.5 million than the estimate. That’s a 21.3 percent increase. The August oil and gas revenue collections were also 127.5 percent or $11.2 million more than August of 2016.

Natural gas collections totaled $17.3 million. That’s $2.8 million or 19.3 percent above the estimate. It was also 138.3 percent more or $10.1 million compared to natural gas tax collections in August of last year.

Overall general revenue fund collections for the month totaled $413.7 million, a nearly 2 percent increase over July. However, they were also $843,000 less compared to August for 2016.

“Having collections come in above the estimate is always a good thing, but I would urge caution to anyone who thinks this recovery will be enough to overcome our current budget challenges. We are two months into FY 2018 and while technically we came in above estimates, we are still having to borrow money for cash flow,” said Secretary of Finance, Administration and Information Technology Preston L. Doerflinger.

At the same time, he added a note of caution and urgency because of a special legislative session set to begin Sept. 25 to deal with a $215 million budget gap.

“With Special Session this month I want to add an additional note of urgency and encourage the Legislature to take the opportunity before them to pass legislation that puts more recurring revenue on the table and reduces our reliance on one-time funds. This is a unique opportunity to change the path that we are headed down for FY 2019. I hope they seize it.”

In other categories, total income tax collections were $149.4 million or nearly 20 percent above the estimate but half a percent below August of last year.