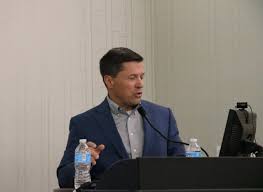 While state legislators grapple with a plan to fix Oklahoma’s state government budget hole of $215 million, some want to increase the gross production tax on oil and gas.

And that’s an issue that prompts Chad Warmington, President of the Oklahoma Oil and Gas Association to declare it’s nothing but political talking points on the part of some Democratic lawmakers.

In an interview with OK Energy Today, Warmington said such a move would harm the industry and in the long run, hurt the state’s economy, resulting in job losses and less state revenue.

But he also took issue with the Oklahoma Energy Producers Association which claimed last week that its poll showed such an increase in taxes on the industry had 67% support from voters.

“After three years of increasing the effective Gross Production Tax rate, even in the midst of industry suffering from a bust in commodity prices, it’s time for the state to stop taxing its number one job creator,” said the Oil and Gas Association in response to the Energy Producers Association claim.