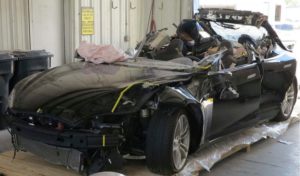 At least one government agency is waving the caution flag as the government moves quickly for the development of driverless cars by automakers.

The National Transportation Safety Board came out with its warning this week after investigating a fatal crash in Florida of a Tesla system which was said to have “played a major role” in the death. The NTSB spent the last year probing the incident.

Known as Autopilot, Tesla’s system performed as intended but according to the New York Times, also lacked safeguards to prevent drivers from using it in the wrong way.

The NTSB”s investigation determined the Florida driver used the system on a road not designed to handle such driverless systems. The driver also turned his attention from the road for an extended period prior to the crash.

“The combined effects of human error and the lack of sufficient system controls resulted in a fatal collision that should not have happened,” Robert L. Sumwalt, the chairman of the N.T.S.B., said at a meeting during which the board’s report was approved.

The announcement could raise a setback for Tesla after the National Highway Traffic Safety Administration announced in January that the company’s Autopilot-enabled vehicles did not need to be recalled.