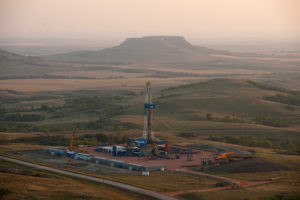 In recent days we’ve heard how Continental Resources founder Harold Hamm was excited about the future of North Dakota’s Bakken shale formation and how some experts felt the play could equal that of Texas’ Permian Basin.

Now comes a report that North Dakota’s oil production has stabilized after two years of decline. The State’s Department of Mineral Resources indicated oil companies pumped 1.05 million barrels a day in July while the state output was more than 1 million barrels a day over the past six months.

In February, state officials had predicted oil production would continue to slide to about 900,000 barrels a day. But oil prices are slowly climbing and so is North Dakota oil production. It even sparked some optimism among state leaders when talking of tax revenue.

“The implications are good for the state,” said Mineral Resources Director Lynn Helms in a recent conference call with reporters. But there is also a downside. Oil prices in North Dakota are about $10 per barrel less than West Texas Intermediate and in recent days, the WTI has been cents under the $50 mark.

After oil prices fell in 2014, the drop forced the governor of North Dakota to call a special legislative session to cut the budget. Current Gov. Doug Burgum worked to get more cuts made this year but state budget officials plan meetings this week to review their projections.