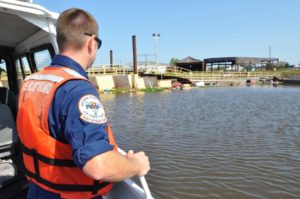 The Coast Guard says less than 20 percent of the hundreds of thousands of gasoline spilled from a Magellan Midstream Partners storage tank during Hurricane Harvey was recovered.

The Guard said 461,000 gallons were spilled from the tank, escaping past containment berms at the tank farm owned by the Tulsa-based company. The tank farm is in the Houston suburb of Galena Park.

Coast Guard Lt. Commander Jarod Ticzko said it’s unknown how much of the fuel evaporated and how much seeped into the ground.

“We know how much spilled, but it’s difficult to say the exact amount evaporated,” said Toczko. 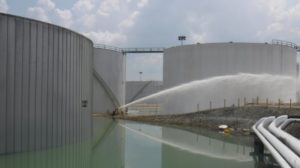 Magellan reported it recovered about 2,000 barrels or 84,000 gallons of gasoline in the days after the Aug. 31 spill. Company spokesman Bruce Heine said the cleanup should be finished in a few weeks. He estimated less than five gallons of fuel reached a small waterway next to the company’s property that drains into the Houston Ship Channel.

“Although we do not have an estimate of the total volume of soil that we will remove and replace at this time, the project will comply with all laws and regulations,” he said.

The company reported the total volume to the U.S. Environmental Protection Agency on Sept. 5.