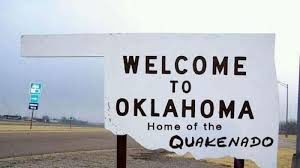 It is a continuation of a lawsuit filed Jan. 12, 2016 by Lisa Griggs and April Marler, residents of Logan County. The suit was removed to federal court then voluntarily dismissed by them in July 2016. A year to the day after the suit was dismissed, Griggs and Marler refiled the suit in Logan County District court (CJ-2017174).

Named as one of the 49 defendants, Chesapeake Operating LLC moved the case to Oklahoma City federal court last week.

The new class-action suit, CIV-17-00942-R seeks to recover more than $5 million in damages and accuses the oil and gas companies of introducing “contaminants into the natural environment that caused an adverse change to it in the form of unnatural seismic activity. In other words, due to Defendants’ pollution of the environment they caused the earthquakes at issue in this case.”

Griggs and Marler want damages to their property, market value losses, emotional distress and punitive damages. They contend that scientists have tied the earthquakes to the disposal of wastewater from fracking operations.

The suit alleged the oil and gas industry has issued public statements to hide the seismic problems it is creating.

“In truth, Oklahoma’s earthquakes over the past five or so years have been caused by the oil and gas industry’s disposal of fracking related waste,” continued the suit. “Indeed, this process of pollution causes earthquakes, and has caused the earthquakes shaking Oklahoma since at least 2011.”

She says her home has experienced shifting in the piers of the foundation, cracked to the concrete blocks, separation of chimney from the home as well as cabinets, cracks to walls and damages and separations in the doors and window trim.

Marler lives in Choctaw and also says her home suffered more than 100 earthquakes of 3.0 magnitude or greater in the past three years. She claims her home has suffered damage and that “these earthquakes were caused by nearby injection wells owned and operated by defendants.”