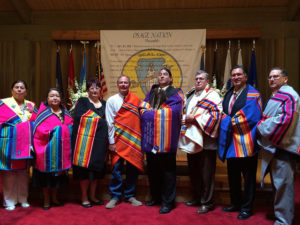 Headright holders are also commonly called shareholders in the Osage tribe and receive quarterly royalty payments for oil and gas production from the mineral estate.

Erwin also maintains that it was a violation of the Indian Civil rights Act of 1968.

“Because of this I think we need to go in and have our attorney file for breach of trust to get your property back, it’s your property,” she said to headright holders. “At no time were you ever paid for it. We still live in the United States of America. You cannot take something away from somebody they have paid for without paying for it … We need to get this clarified and the only way we can do that is to file for a breach of trust.”