Valero Moves Ahead With Refinery Restart Despite Emissions After Harvey

Hurricanes Have Experts Wondering About Refinery Tanks and Locations 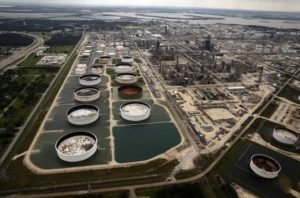 The damage inflicted by Hurricane Harvey on Texas Gulf Coast refineries has experts wondering about what Hurricane Irma might have done to storage tanks in Florida.

In Texas, more than two dozen storage tanks holding crude oil and gasoline and other contaminants ruptured or failed. In one unconfirmed case, a company emptied its tanks then refilled them with water to keep the tanks from floating away in floodwaters. It also prevented further contamination in the ruptures.

An estimated 145,000 gallons of fuel and toxic pollutants were released when the tanks ruptured in certain instances. There are an estimated 4,500 storage tanks along the Houston Ship Channel.

Florida has no oil refineries but it has 20 petroleum product storage terminals along with 30 chemical companies. A number of them are in the Tampa Bay area.

“Tampa Bay is one of the most vulnerable cities in the country” to hurricanes, said John Pardue, a Louisiana State University professor who has researched problems with storage tanks during storms.

“But there’s no requirement that says when you’re in a hurricane zone you’ve got to do things differently,” Pardue added. “If we’re going to continue to put some of these facilities in harm’s way, it would be great to have some specific regulations” to safeguard storage tanks.