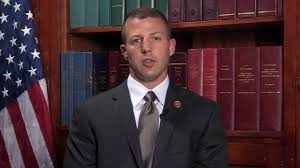 Look for the U.S. House to consider some amendments of Oklahoma congressman Markwayne Mullin to reject Obama era protections this week as Representatives decided on fiscal 2018 spending by the Interior Department and the Environmental Protection Agency.

Last Friday, the House rejected efforts to maintain some of those Obama regulations but it never got to amendments proposed by Rep. Mullin.

One of his amendments is to prohibit funds from enforcing Obama administration EPA rule related to regulating methane emissions. He and Rep.Scott Perry, (R-Pa.) are proposed to prohibit federal funds from being used to measure the cost of carbon.

The House also voted against deeper cuts to Interior and EPA.

Earlier the House voted 216-186 on a move by New Mexico Republican Rep. Steve Pearce to stop implementation of the Obama-era rule restricting methane flaring from oi land gas drilling on federal lands. How that vote might affect Mullin’s similar move is unknown at this time.

The House on Friday also rejected Tennessee Republican Rep. Marsha Blackburn’s move to cut the $31.4 billion in the Interior-EPA section of the omnibus by 1 percent across the board.