Hurricanes Have Experts Wondering About Refinery Tanks and Locations 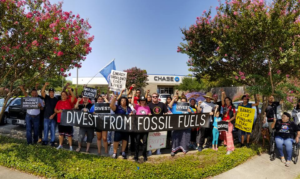 Environmentalists staged a recent protest in front of the Dallas, Texas headquarters of Energy Transfer Partners, the company that built and is operating the Dakota Access Pipeline in North Dakota.

Dozens rallied at the company’s headquarters then marched to the home of ETP President Kelcy Warren. There, they directed comments to Warren that he is responsible for violations during the construction and operation of not just the Dakota Access Pipeline but others.

Members of the Indigenous Environmental Network contend EP is responsible for using what it called “illegal counterterrorist tactics on Indigenous Peoples and their allies during the Standing rock movement.”

“Kelcy Warren wants to force his pipelines through our homes, so we brought the resistance to his home,” said Cherri Foytlin, state director of BOLD Louisiana. “We are the first peoples of this land and we will not yield, we will stand.”

Her group and others also rallied at banks like Wells Fargo and Chase Bank in Dallas for helping finance ETP projects. Other Indigenous representatives were part of the protest including Joye Braun, Cheyenne River Frontline Organizer of the Indigenous Environmental Network.

Frankie Orona, Director of the Society of Native Nations spoke to the crowd in front of Warren’s home.

“We have decided to walk to your home and show your neighbors  what kind of person you are. Its our way of saying, we will not be intimidated by you or your dirty company.”