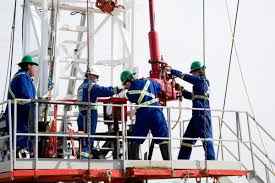 The State Employment Security Commission reports unemployment rates improved over the year for most counties in August. Rates were lower than a year ago in 62 of 77 counties, higher in ten and unchanged in five counties.

Of the four major metropolitan areas of the state, all reported a slight increase in unemployment from July to August 2017.

Oklahoma City’s jobless rate went from 4.1% in July to 4.3% or an increase of 1,174 in the jobless column. The energy industry, reflected in the Mining, Logging and Construction category saw total employment at 44,400 in August, down 300 workers from July.  A year ago, the city reported 44,800 workers in the category.

While much of Oklahoma’s oil and gas employment is busy in the STACK oil play, the three counties that make up the STACK had mixed results.

Kingfisher County’s jobless rate rose by 10 to reach 281 with 8,116 employed. It means the August jobless rate stayed the same as in July which was 3.3%. A year ago, Kingfisher county’s unemployment rate was 3.4%