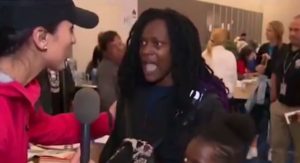 Okay, okay. Maybe it is not energy related. But after reading a story in the Washington Post today, I couldn’t help but pass it along.

I’ve been a radio journalist and writer for nearly four decades and after reading the Post story, I thought, “it’s about time!”

The story focused on the response of a Houston flood survivor who didn’t like a CNN reporter sticking a microphone in her face after she and her daughter had been rescued. The woman angrily responded with a curse-filled answer, then added, “And you’re really trying to understand with the microphone still in my face. When she’s shivering cold and my kid’s wet and you still putting a microphone in my face!”

I can’t tell you over the years of covering disasters like these, how many times I had heard some reporter ask the question, “how do you feel?” after they either lost a loved one, narrowly survived a tragedy or was overcome by grief in a dramatic situation.

I’ve faced threats over the years in attempts to interview someone, notably the first one when I approached a man about an electrocution and he quickly promised to take me around the corner and punch me. It taught me a lesson to use some skill and kindness in attempting to get information in those situations.

The CNN incident reminded me of the “how do you feel?” question. Adding to my criticism was what Washington Post media reporter Paul Farhi wrote in defense of the way disasters are covered.

“While it wasn’t hard to relate to the Houston woman’s pain and distress, sustained news coverage of disasters such as Hurricane Harvey largely has a positive effect. News reporting stimulates government relief efforts and private donations. It also inspires heroic volunteers. Some of the most heartening images of the past few days, in fact, have been those of ordinary citizens employing kayaks and other recreational vessels to rescue people from flooded homes.”

First of all, I don’t believe news coverage “inspires heroic volunteers.” They do it whether there’s a camera or mic in their face or not. They do it because it’s the right thing to do, not whether CNN is there covering the event live.

Either Farhi has never covered such a traumatic event and never had to know when and how to approach victims like those in Houston, or he has lived far too long in the Washington Beltway.