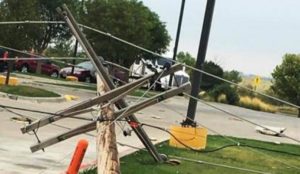 The Amarillo Globe-News reported more than 40 utility poles were downed in the Saturday storm. Crews with Xcel Energy spent the weekend attempting to restore power, but the Pamp Regional Medical Center was forced to run on a backup generator as of Sunday afternoon.

Nearly 80 oilfield meters were offline throughout the northern part of the Panhandle.

The hospital suffered some structural damage from the force of the winds. Emergency room entrance doors were blown off. The plexiglass walls of the MRI casing were shattered and the roof of the penthouse unit was ripped off. The hospital’s air conditioning system was also temporarily knocked out.

No injuries were reported. But the hospital did not have access to its electronic medical records.