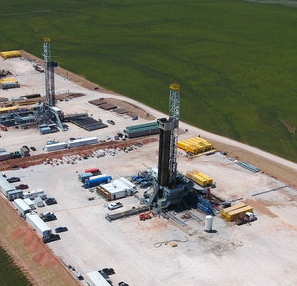 Continental’s were multi-unit wells at 18 16N 10W located about 7 miles northeast of Watonga. Both had spud dates in June 2016. Drilling on the two Blurton wells finished last fall while completion was made in March 2017. One produced 279 barrels of oil a day while the second came in with 285 barrels of oil a day.

Two of Newfield’s wells were just to the northeast of the Continental wells in an area north of the Chisholm Trail Technology Center. They were multi-unit wells. One Stark well, 1 16N 10W produced 721 Boed while the other had production of 716 Boed. Drilling started in January and February and completion on the two wells was made in May 2017.

Newfield’s three other wells were in Kingfisher county. The largest, 33 17N 7W came in with 516 barrels a day along with 2,358 Mcf of gas. The Jolee is located 3 miles north of Kingfisher. Its spud date was in January. Drilling finished in April and completion was made in June.

Another Newfield well, 30 15N 7W,  was hit a half-mile north of Okarche. The Gravitt had production of 371 barrels a day. The Kiera well, 3 15N 6W, is 5 miles southeast of Kingfisher. The spud date was April and drilling ended in May with completion in June. Its production is 462 barrels a day.